The Playways Toyshop was instigated by Florence Sulman in 1935, as a response to the difficulties kindergartens faced in obtaining appropriate equipment and toys.Initially known as the ced information leaflets for parents on making and selecting suitable toys for their children.

Initially most of the toys were specially designed and made locally by retired carpenters.

“Volunteer groups worked at Playways daily to produce cut-outs and puzzles and it was years before local companies were persuaded to manufacture to our designs.”

Playways also imported toys from Sweden, England, Holland, US, Germany, Switzerland and Italy to sell to parents and kindergartens.

As well as selling toys, and distributing literature, Playways organised public displays in venues such as banks and department stores to inform the public of the selection of toys, books and equipment for young children. In 1960, Playways held a week long public display in the main store of Walton Stores in Park Street, Sydney, and in 1971-72, it had a permanent display window in St James Station and large displays of Playways’ toys in the ANZ and CBC banks in the city. It always included trained kindergarten staff on its personnel to provide advice to parents, teachers, occupational therapists, librarians and others about the appropriate selection of toys.

In the early 1960s, Playways exhibited toys at a Travelling Exhibition organised by the Melbourne Art Gallery where it was visited by children’s book authors Dr Suess, and PL Travers. This was followed by an exhibition in Melbourne of Playways toys selected by the Director of the Design Council of Australia, Colin Barrie. 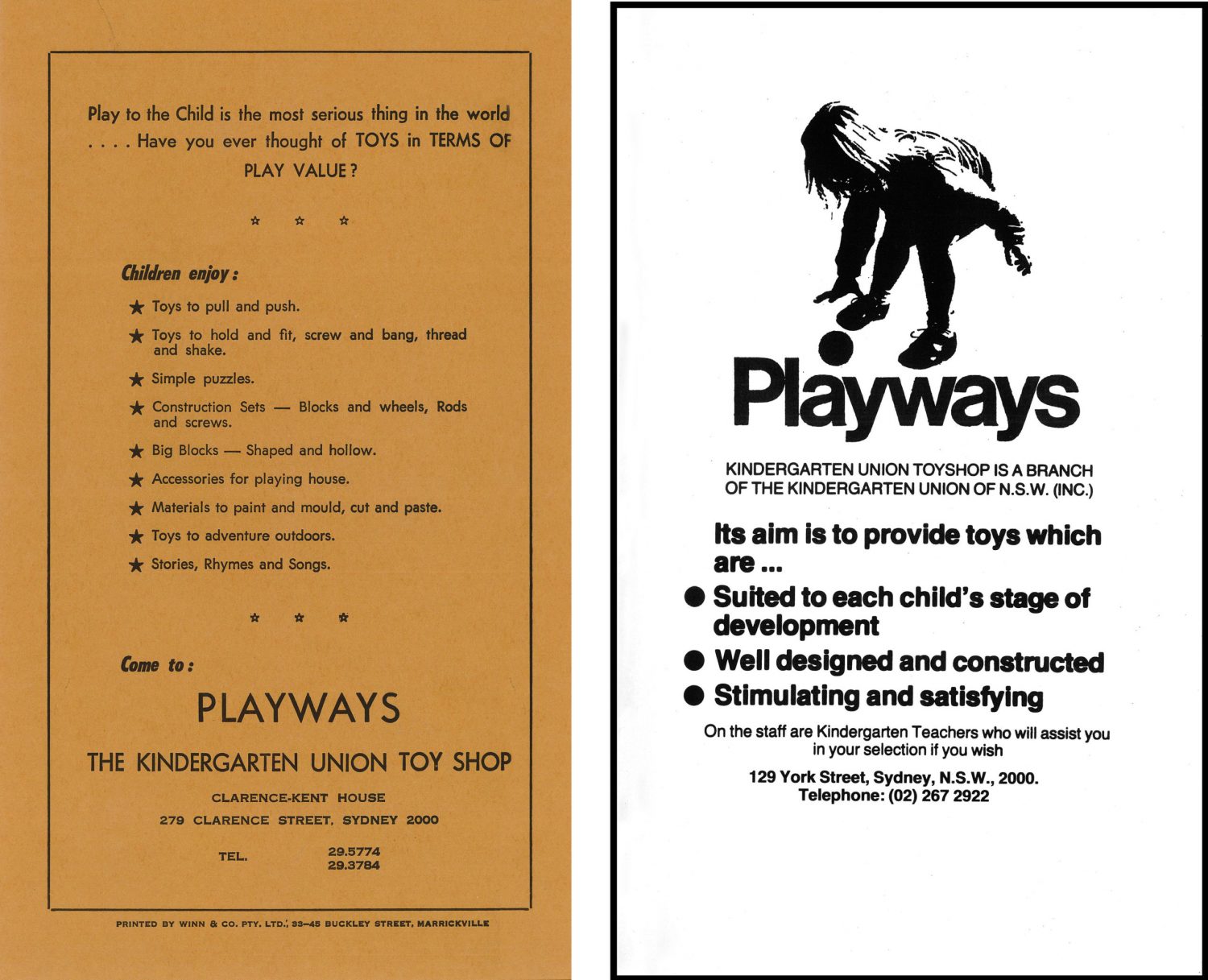 While the 1960s was a period of steadily increasing profits as Playways despatched thousands of orders to places as far afield as the Northern Territory, Papua New Guinea, Singapore, Iran and the Phillippines, in the early 1970s it begins to lose money and in 1973 places an increased focus on toys for ‘handicapped’ children.

By 1974, Playways began to make money once more and opened a shop in Parramatta in 1976. In 1977, a Playways mobile van service to kindergartens commenced and continued to service kindergartens throughout NSW until 1983.

In 1978, Playways became directly managed by the Kindergarten Union. The 1980 Annual Report indicated some consternation between traditional Playways supporters and its new management. Its future was thrown into doubt in an increasingly competitive retail environment. The final mention of Playways appears to be in the Union’s 1986 Annual Report.

Originally located in Spring Street, Playways moved to larger premises in the basement of 228 George Street in 1958, then to Clarence Street, and in 1983 to 129 York Street.